The Gyokucho brand Japanese saw is the best overall value.

I have given up on western style push saws unless they are tensioned blade saws like a hacksaw or bow saw. Standard western saws without a blade stiffener have to be very thick and stiff to overcome the blade wanting to bend and fold on itself during the push motion through the stock. They even wear me out, and I am fairly strong and coordinated. There are of course some very fine western style back saws and dovetail saws with blade stiffeners, but these tend to be very expensive. I have actually owned some of these but have been very disappointed in the cost to performance ratio. I’ve tried to resharpen the teeth myself as well as paying a sharpening service, with very poor results.

Japanese saws are my choice for woodworking, and have been for many many years. I come from the “let’s get on with it” school of woodworking. I want to do good precise work, but I don’t want to fuss over a consumable tool like a saw. For me hand saws are consumables like sandpaper. I won’t make big monetary and emotional investments in handsaws, unlike say a special square and ruler set, or a good hand plane, both of which will last a lifetime.

I do not refer to these saws by their Japanese names because I feel ridiculous trying to pronounce them. Fortunately it doesn’t matter what I call them, what matters is how they cut.

These saws cut like nothing you have ever used before, and I think they are one of the best values in woodworking tools.

In my four part Japanese Saw video series I show the three different saws I use on a daily basis. Two of the handles are well over twenty years old. When the blade dulls I can easily order a replacement blade from Japan Woodworker. The replacement blades generally last me about two to three years.

If you could only purchase one Japanese saw, buy this one:

If you could buy two Japanese saws, add Allan’s favorite:

For delicate furniture work, like dovetails, this works best:

Several years ago, a hardware store where I am a long time customer gave me several Japanese “style” saws to try that they just started carrying. Even though they weren’t my brand I was willing to give them a try. Two weeks later, after an honest assessment using them in my shop, I returned them to the store much to their surprise. I told them they were inferior products to Gyokucho RazorSaws. They were priced within just a few dollars of the RazorSaw, but even if they cost one quarter of Gyochucko’s saws, they still wouldn’t be worth it. 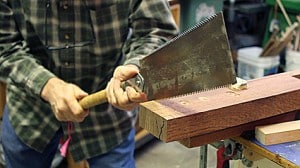 I bought my first Japanese saw when I was 25 and destroyed the blade in just a few days. I was trying to “country mule” it through the wood while holding it and using it like a western saw. Japanese saws have become very popular here in the U.S. but invariably when I see one being used, it is always with the handle up and the blade pointed down, in the manner most of us were taught since childhood. It took years for it to finally dawn on me to drop the handle towards the floor and pull the stock being cut into the supporting surface. The saw cuts on the pull, so why not pull down to with the aid of gravity and into the support of the work piece? I have never said a word about this to anyone. Dudes do not appreciate being told they are cutting like a kid.

Of course there are times when you have to have the handle up. Namely when cutting wide pieces or panels where the blade is unable to span the distance. When I’m working with a piece of this size I just use my panel saw or my table saw. Japanese saws for me are used for joinery and cutting billets of wood for a specific project.

The Japanese saw looks strange if you’re not familiar with them, but for the price, you can’t afford not to give them a try.

I highly recommend the Gyokucho RazorSaw brand of Japanese pull saw. I bought my first one 26 years ago. It still has the original handle and I use it every day.

I just made my first video series demonstrating Japanese hand saws. If you watch the videos in this post you’ll get an introduction to using these invaluable tools. You’ll see me hand cut a tenon,  rough cut a board and quickly change the blades.

This site uses Akismet to reduce spam. Learn how your comment data is processed.

Send us a message

Scroll Back to Top